The following guest post has been received from our friend Fidel Porcuna de la Rosa, a Spanish Abogado, to whom we are most grateful. This is what he writes: 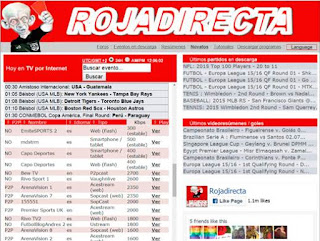 Following Bajatelotodo (on which see the 1709 Blog here) comes a recent Spanish decision of 16 June 2015 from the Juzgado de lo Mercantil no. 11, Madrid, sitting as one of the city's Commercial Courts, in an application for a preliminary injunction against an aggregator of hyperlinks to TV and internet subscription broadcasts of soccer games at www.rojadirecta.me. Virtually everyone with any interest in the Spanish and Portuguese soccer leagues has heard about this site, as is evidenced by the fact that this litigation, an IP related issue, was subject matter of an extended article in the well-read Spanish newspaper El Mundo.

The claimants were Mediaproduccion S.L.U. and Gol Television S.L.U., supported by the Spanish National Soccer Federation. The defendants were a company, Puerto 80 Projects S.L.U., and an individual, Igor Seoane, administrator and trade mark and domain name holder of the site www.rojadirecta.me. This site contained hyperlinks to TV and internet broadcasts of the Spanish and Portuguese soccer leagues, which could only legally be accessed by subscription payment. The owners of these hyperlinks made the broadcast freely available, and the defendants indexed, assorted and grouped (among other things) the hyperlinks in www.rojadirecta.me and other related sites.

In her ruling, the judge held that defendants could be liable for the unauthorized exploitation of Mediaproducción's producer rights and Gol Television's broadcasting rights, by virtue of Articles 120 to 127 of the Copyright Law. The judge also mentioned that the defendants’ behaviour could fall within Articles 15 and 4 of Unfair Competition Law No. 3/1991, in particular because the defendants did not observe the legal administrative requirements to which broadcasting and producers are subject, thus enjoying an anticompetitive advantage (a similar case involved Uber, here and here). The judge further considered that, in any event, their conduct likely did not fulfil the good faith standards in trade.

Under those findings, the judge ordered Puerto 80 Projects and Seoane to cease immediately and temporarily facilitating hyperlinks that give access to soccer games which were originally broadcast under payment subscription, presently or in the future. In addition, the judge preventively ordered to the registered internet access providers to block or prevent by the appropriate technical means, should the defendants not comply with the order in seven days from the enforcing date of the preliminary injunction, the access from Spanish territory to the site www.rojadirecta.me or to any other site used or to be used by the defendants for the same infringing purposes.

Since this decision was taken in the context of a preliminary injunction proceedings, it merely anticipates a potential decision on the action on the merits, but it is precisely for this reason that the decision is important; in preliminary injunction proceedings the claimant must clearly show a prima facie case, and the provision of hyperlinking has always proved to be a challenge in this regard.  The following points of the decision should be highlighted:

- The activity ascribed to the defendants consists of aggregating and embedding hyperlinks to TV and internet broadcasts for soccer games, the access to which could only legally be purchased by payment . Owners of the hyperlinks, named in rojadirecta.me as “official partners”, collected the signal from legal carriers and made them freely available online, sometimes deleting the “Gol Television” figurative mark affixed in the original broadcast.

- The judge gave importance to the defendants’ activity in indexing, assorting, grouping and updating the hyperlinks of the soccer games being broadcast or to be broadcast, as well as the fact that some of the hyperlinks did not take to the user to a different website, and so the contents of the hyperlinks could be watched framed in rojadirecta.me site. The judge described the defendants’ behaviour as an active and intentional cooperation because they were fully aware that the hyperlinks represented unauthorized communications to the public (to a new public, according to Svensson and other posts here and here) and contained unauthorized reproductions of the protected broadcasts. She therefore concluded that the defendants, by indexing, assorting, grouping and updating the hyperlinks to protected works, were also infringing the claimants’ rights.

- The defendants argued that there was no longer a reason to adopt a precautionary measure because the football seasons had ended or almost ended, and because it was not possible to know in advance whether the claimants would have the broadcasting rights over the next soccer game seasons: the claim, if successful, would then represent a form of censorship. They also argued that the claim was disproportionate as the purportedly infringing hyperlinks represented only 2% or 3% of the content of the site. The judge dismissed the arguments. Producers' and broadcasters' rights were enforceable for 50 years, which applied to past games to which hyperlinks could still be provided. She then indicated that the defendants were subject to fiduciary duties in accordance with Articles 16 and 17 of the Information Society and E-commerce Law No.34/2002 (transposing Directive 2000/31). The judge established a similarity with the fiduciary duty contained in the Press and Publishing Laws No. 14/1966 (Article 37) and noted that, in fact, given the small number of hyperlinks (not beyond 76 for each game) it was feasible to establish whether they were infringing. Finally, the judge considered that the claim to immediately cease was not disproportionate since it was evidenced that, contrary to what defendants stated, at least half of the hyperlinks infringed the claimants’ rights.

By way of a footnote, this blogger clicked through to the offending website and this is what he found:

Blocking access to the rojadirecta.me website has been made pursuant to a Court Order dated 7 May 2015 obtained by the members of the Football Association Premier League.