You may have heard of “sunburn art” which seems to be the latest selfie trend. One can place pieces of (artfully) cut cardboard onto one’s skin to shield body parts from the sun, and then hit la playa sans sunscreen. At the end of the day, voilà!, #sunburnart is posted on social media. One can also use sunscreen to design lighter shaded areas on the body, while the unprotected skin takes a nice lobster color. Indeed, while #sunburnart selfies will not send a piece of art tumbling down, they nevertheless come with risks, ranging from potential online embarrassment to skin cancer. 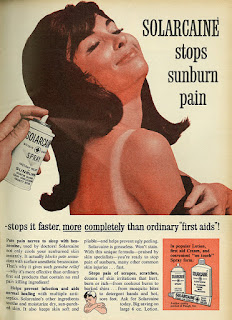 #SunBurnArt as Performance Art
Because #sunburnart is potentially dangerous to one’s health, and as some of the patterns are quite original, one could consider some of these selfies as performance art on social media (oh yeah!).
Performance artists often put their health, even their lives, in jeopardy when using their bodies to create a performance. In the 1971, performance artist Chris Burden had a friend shoot him in the arm with a gun for the performance Shoot. The same year, Gina Pane climbed a ladder, which steps bore razor blades, to create L’Escalade. Three years later, Chris Burden was nailed on a Volkswagen “bug” car, which was pushed out of a garage, where the artist stayed for two minutes to create Trans-fixed. For Rhythm 0, created in 1974 in Italy, Marina Abramović placed 72 objects on a table, including a gun, a bullet, nails, a whip, a pocket knife and, yes, a band aid and alcohol, which the audience could use as they wished  on her body. Innocuous, even potentially pleasant objects, such as perfume, water, or a coat, were also available to be used. However, the artist ended up covered in blood.
These performances were all recorded, albeit not on selfies, and thus are protected by copyright in the U.S., which protects works only if fixed in a tangible medium. However, a performance artist wishing to be the sole right holder should make sure that the person photographing or recording the performance cannot claim the status of a co-author. Also, that fixation must be done “by or under the authority of the author.” This was reinforced recently by the 9th Circuit en banc in Garcia v. Google, where the court noted that actress Cindy Garcia could not claim copyright in her performance, because, among many other reasons, she had not fixed her performance herself (see p. 16).
In France, the Paris Court of Appeals held in 2004 that the photographer who had taken pictures of the Première Tentative de rapport avec un chef-d’œuvre performance created by Alberto Sorbelli, dressed as a female prostitute, at the Louvre Museum in front of the Mona Lisa, was only the co-author of the work, along with Mr. Sorbeli, who had filed a copyright infringement suit after pictures of his performance had been published without his authorization and using a different title. Interestingly, Mr. Sorbelli had also claimed a violation of his right to his image, and this claim was also successful.
Performance Art and Nudity, Oh Là Là!
Let’s stay in France, where performance artist Milo Moiré was arrested this month in Paris for public exposure, putting a stop to her performance piece wherein she asked delighted tourists to take selfies with her, stark naked, in front of the Eiffel Tower. Indeed, even though the French have generally a laissez-faire attitude about nudity, “sexual exhibition imposed on the sight of others in a place accessible to the public” is incriminated by article 222-32 of the criminal Code and is punishable by one year imprisonment and a 15,000 Euro fine. It isnot nudity per se which is incriminated, but sexual exhibition, and the French courts consider what was the intention of the person who exhibited herself to judge whether a particular public nudity is indeed a sexual exhibition. The artnet news article (see above) notes that “nudity is normally tolerated [in France] if it is part of a performance. The arrest indicates that France does not view her as a legitimate artist.” It is probable that the police officers who arrested Ms. Moiré could not assess on the spot whether her public nudity was or was not sexual exhibition, especially because she encouraged contact with members of the public. Ms. Moiré was not charged, but if she had to face trial, her lawyer would probably would be successful in arguing that, because her public nudity was part of her artistic performance, the facts lack the moral element of “exhibition” and thus cannot be incriminated.
Let’s all have a fun and safe summer!

Re Milo Moire, I think the issue of public exposure and nudity as part of a performance are not contradictory. If one creates 'performance art' in a night club, a brothel, at the Moulin Rouge, Crazy Horse and indeed anywhere where people who may find public nudity offensive can decide not to go, that is OK. Beaches are an interesting case where local custom decides whether nudity is to be expected or not. Outside the Eiffel Phallus tourists and Parisien natives expect a minimum level of clothing. If exposing genetalia in public is considered unnacceptable, it should be considered unnacceptable in such locations. If there is a well publicized phot-shoot or nude cycle rally or whatever, then those who find nudity offensive will stay away.
This is simply a question of balance. You can't have every flasher in a raincoat claiming the defence of performance art.