Jean Cardot is a renowned French sculptor and is the author of a bronze statue of Sir Winston Churchill which can be seen since 1998 in Paris, Avenue Winston Churchill, close to the Petit Palais. 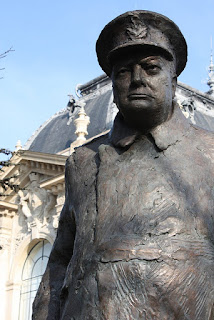 In 2011, the French men’s basketball team qualified for the European basketball championship and the London Olympics. In order to celebrate these achievements, Nike and Ubi Bene, an events company, adorned the 3,17-meter Churchill statue with a giant jersey of number 9 player Tony Parker, bearing the Nike trademark (see here for a picture). The picture was then published on several media, and even shown during the evening news show of a popular private television network.


Jean Cardot filed a suit in the Paris Tribunal de Grande Instance (TGI), claiming copyright infringement. Article L. 122-1 of the French Intellectual Property Code (IPC) gives the author the exclusive right to represent and reproduce the work. The author also claimed infringement of his droit moral, provided by article L. 121-1 of the IPC. The TGI ruled in his favor on May 7, 2014. The sculptor nevertheless appealed, arguing that the fines should be higher. The Paris Court of Appeals confirmed the TGI’s judgment on June 19, 2015, number 14/13108 on copyright and moral right infringement, and awarded the author higher fines.


The Paris Court of Appeals cited article L. 122-4 of the CPI, which provides that translating, adaptating, transforming, arranging or reproducing a protected work “by any technique or process” is an infringement of the rights of the copyright holder. For the Court, Jean Cardot’s work “was diverted for advertising purposes for the benefit of Nike France by affixing its mark on the statue and was distorted by affixing a sponsored shirt, without his consent and without his name being mentioned” and these actins infringed both the copyright and the moral right of the author.


The sculptor had argued that the image of his statue bearing the jersey had been “widely distributed and had generated extremely important benefits for the infringing companies.” Indeed, Ubi Bene had billed 22,245 Euros to Nike for the promotional event, and, as noted by the Court, had also benefited from the publicity given to this event. Nike also benefited from this event, as the image of the statute had appeared on prime time news on a private channel, at a time where the network charges 92 000 Euros for 30 seconds.


The Court of Appeals also noted that such act “has undermined the spirit of the work which pays homage to the British Statesman who, in time of war, helped France to restore democracy, even if his message “We Shall Never Surrender,” reproduced on the players’ tee-shirts, was thus being integrated by their exceptional achievements and thus demonstrated an awareness of the work of Jean Cardot.” The famous Churchill phrase is indeed engraved on the base of the statue.


Image is courtesy of Flickr user Javier Lastras under a CC BY 2.0 license.
Posted by Marie-Andree Weiss at 2:11 pm

And this also proves that, if France had freedom of panorama, copyright infringement would not be a problem, but the author could still have claimed moral rights and get some money from a supposedly egregious case.