During each of the twelve days of Christmas, the 1709 Blog is bringing readers some information concerning an author, composer, artist or creator who died in 1941 and whose works fall into the public domain in 2012 in countries which operate a "life plus 70 years" copyright term.  This series starts with the brilliantly gifted Irish author James Joyce. 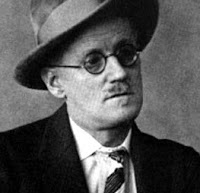 The oldest of ten surviving children, James Joyce was born into a middle-class Dublin family. Despite his family’s gradual slide into poverty during the 1890s, Joyce completed his education at Jesuit schools Clongowes and Belvedere and continued to excel in his studies at University College, Dublin. Following his graduation in 1903 Joyce struggled to scrape a living. Although he earned some money reviewing books, teaching and singing, Joyce became a heavy drinker and did not manage his finances well. The following year Joyce eloped to the continent with his sweetheart Nora Barnacle, seldom returning to Ireland in subsequent years. However, Joyce’s works were always set in Dublin, and his semi-autobiographical style evoked relatives and acquaintances from his Dublin years.
"

Joyce's early volume of short stories, Dubliners (1914), was suppressed in Ireland due to its candid analysis of the stagnant Dublin society. Joyce spent World War I in Zurich, working on his first novel. A Portrait of the Artist as a Young Man (1916) is heavily autobiographical, portraying the protagonist ‘Stephen’ as he grows through adolescence and realises that he must free himself from the constrictions of Irish society. The publication of Joyce’s next major novel Ulysses (1914-21) was delayed by obscenity charges, appearing in America only in 1933. During this time Joyce wrote his play 'Exiles', and published a number of books of poetry. Joyce’s literary style, which had developed gradually since Dubliners, was pushed to the limit in his next and final novel, Finnegan’s Wake (1939). This novel abandoned all the literary conventions of plot and character-painting, and is replete with Joyce’s characteristic shifts in consciousness, rich language puns and allusion. James Joyce became famous for his avant-garde exploitation of the English language, and is widely regarded as one of the most influential modernist writers of the early twentieth century.

This series has been composed by Miriam Levenson, to whom the 1709 Blog gives its grateful thanks.
Posted by Jeremy at 11:59 am

I have read Ulysses in four days and it was such a very odd book to read, it was like, I had read the Homer and found that Homer was an easier read then James Joyces. But It was a wonderful book. I am listening to the audio book and it has makes the imagination more vivid picture of what I read in print. I can say I have read it front to back Dec 26 2011. Now to Finnegan's Wake
Thank you
Kerdal