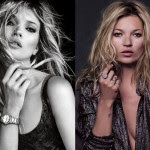 High-end US jewellery designer David Yurman was pretty upset when he found out that French competitor FRED's new ad campaign by Sonia Sieff featured supermodel Kate Moss, not for any particular reason except that Ms Moss had been featured in Yurman's campaign by Peter Lindbergh shortly before. Moreoever, the model appears portrayed there in a way which Yurman deems to be "embarrassingly similar" to his own ad campaign.
In particular, Mr Yurman claims that in one b/w ad from his Spring 2011 campaign Kate Moss holds up a watch on her right arm to her parted lips, simultaneously pulling at a few strands of hair near her face. A similar colour image to promote LVMH's FRED shows Moss wearing a set of rings on various fingers with two hands up to her mouth, also pulling at a few tousled strands of hair. 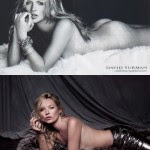 In another b/w photograph by Lindbergh Kate Moss is portrayed naked, lying on her stomach on a furry white rug, wearing Yurman bracelets on her left arm. FRED campaign includes a colour photograph of the model lying topless on her stomach on a black fluffy rug, wearing leather trousers and rings on her right hand, but with a similar expression to that of the Yurman image.
As far as we know, no legal action has been taken against FRED yet. However, readers of this Blog may be interested in discussing this case, as the alleged similarities between the two campaigns are certainly strengthened by the fact that both feature the same subject showing similar facial expressions ...
More on this story on The New York Post here
Posted by Eleonora Rosati at 9:36 am

Although this hasn't (yet) gone to litigation, I do despair about people (especially creatives like jewellery designers) who can't distinguish between the idea and the expression when it comes to copyright protection.
Or pehaps I'm wrong and Yurman understands perfectly and is merely seeking publicity by creating an artificial spat.

It seems to me a model will have a particular set of poses and expressions. If using her is actionable, does that limit each model to only one client?