During each of the twelve days of Christmas, the 1709 Blog is bringing readers some information concerning an author, composer, artist or creator who died in 1941 and whose works fall into the public domain in 2012 in countries which operate a "life plus seventy years" term for copyright in authors' works. Today's feature focuses on the Queen of Canadian Folksingers. 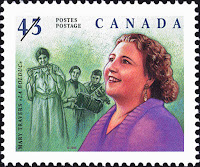 ‘La Bolduc’ – Mary Rose-Anna Bolduc, née Travers, came from a humble background. Her only music teacher was her father, and in her youth she learned several traditional Quebec folk instruments. The family could not afford a record player or sheet music, and Mary learned everything by ear. Her financial circumstances did not change after her marriage to Edouard Bolduc in 1914. Mary would often entertain family and friends by holding musical soirées; after a while she was spotted by a troupe leader where she earned some money playing the violin. Her voice also caught the attention of a record artist and in 1929 Mary’s second recorded song met with unprecedented popularity: more than twelve thousand copies were sold. Following this astounding breakthrough, ‘La Bolduc’ released a double-sided record of her own songs every month with great success. In the early 1930s Bolduc formed her own touring troupe, La Troupe du bon vieux temps, which met with even greater acclaim. When record sales began to slump, income from her performances remained high.

Quebec’s first singer-songwriter developed her own trade mark style of writing, combining lively, upbeat rhythms with comic lyrics. The folk music of her youth played a strong influence on Bolduc’s songs; she frequently set original lyrics to traditional melodies. Many of these songs were broadside ballads, in which current topical events are set to old folk tunes. Some of Bolduc’s best-known songs today are ‘Qui vous avez une fille qui veut se marier’ (‘If you have a daughter who wants to wed’), and ‘La cuisinière’.

This series has been authored by Miriam Levenson, whom the 1709 Blog gives its grateful thanks.
Posted by Jeremy at 5:59 am