Keep in Touch With the Dutch 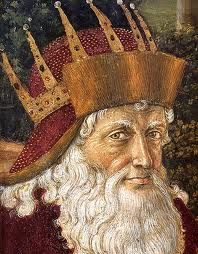 Melchior the Magi
Torrent Freak reports a sad tale about Netherlands collecting society BUMA/Stemra which does little credit to either the society or a board member of that society - one Jochem Gerrits.
The tale involves a Dutch composer, Melchior Reitveldt, who wrote a work for an anti-piracy campaign being run by BREIN. The video was shown at a film fesival - so far, so worthy. But then our hero found the video turning up on other commercial DVDs including such slow sellers as Harry Potter! No money was paid to Melchior so he alerted his local collecting society BUMAS/Stemra - expecting their aid. Aid turned up all right in the shape of caped crusader, and BUMA/Stemra Board member Jochem Gerrits. The proposal was this.......can you see where this is going, oh jaded music industry types? Idealists, look away now.
Gerrits offered to help on condition of Melchior assigning the copyright to Gerrits and thus entitling Gerrits to 1/3 of the revenue. (How Gerrits found out about our hero's problem is a complete mystery!) Torrent Freak provides all those interested with a delicious link to a POWNews recorded conversation between Melchior's financial adviser and his would-be saviour.
Melchior Reitveldt is claiming Euros 1.3 million. Jocchem Gerrits is claiming he can help.
BUMA/Stenmra quote of the week: "1 euro in, 1 euro out. Like all associations, Buma is not about making profits. The same applies to Stemra. Our exclusive function is to represent the interests of music authors"
Posted by Harcourt at 1:16 pm