"Que Sera Sera, We sue in the Pee-Cee-Cee" 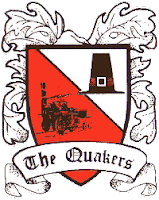 Hodgson and another v Isaac and another [2011] EWPCC 037 is a fascinating little case which emerged from the Patents County Court, England and Wales, last Monday, courtesy of Judge Colin Birss QC. Hodgson, who was wheelchair-bound as a result of meningitis, wrote and published a autobiography, Flipper's Side, in 2000, with the help of Jarvie. The book, which told of his life as a supporter of Darlington Football Club (the Quakers) and his experiences, included a football chant used by supporters of the club. Sung to the popular 1950s tune of Que Sera Sera, it ran like this:

"When I was just a little boy,
I asked my mamma, 'what should I be?
Should I be Darlo? [an affectionate abbreviation for 'Darlington FC]Should I be Poolie?' [a presumably less than affectionate term for local rivals Hartlepool]Here's what she said to me:
'Wash you mouth out son,
Go get your father's gun,
And shoot the Poolie scum,
shoot the Poolie scum.'" [a surprisingly violent sentiment from supporters of the Quakers ...]

In 2001 Hodgson and Jarvie worked with a film company, Shakabuku, to write a script based on the book but, by 2006, the relationship between them and Shakabuku had broken down.

Isaac, a script writer, owned a company called Notting Hill Movies. In 2006 he became involved with Hodgson, this being part of a project to make a film based on Hodgson's life story, to which end he wrote a script which told of a man who, having been disabled by meningitis, became a supporter of the club. This script, as luck would have it, featured the football chant mentioned above.  Hodgson, Jarvie and Isaac formed a company to promote the script.  Thereafter things began to deteriorate.  After Hodgson sought alterations to the script a dispute broke out, following which Hodgson withdrew Isaac's permission to use an adaptation of the book. Isaac retorted that he didn't need Hodgson's permission anyway, since his script was not an adaptation of the book.  Hodgson and Jarvie then sued Isaac for copyright.

Judge Birss QC had to consider whether the script was indeed an adaptation of the book since the claimants agreed that, if it was only based on conversations with them and not on the book, it wouldn't be an infringement.  Isaac said he'd  written the script after conversations with Hodgson and that he hadn't even read the book.

Judge Birss QC allowed the copyright infringement claim.  In his view, he had to consider whether the elements taken from the book were the expression of the intellectual creation of their author [Infopaq]. Taking both the book and the script as a whole, it was clear that the plot, characters and striking incidents and events were very similar and, if it was possible to quantify the degree of similarity, about half of the dramatic incidents in the script had been derived from the book.  Isaac did have access to the book when writing the script and. given that he had clearly copied part of the Shakabuku script (which he had permission to do at the time), there was no reason why he would not have felt free to base his work on the book itself.

Turning now from the general to the specifics, the judge now considered the chant. Although the claimants made no claim to have composed it, in evidential terms it was something which was included in the book and which, appearing in Isaac's script. had to have come from the book itself. What's more, in addition to the use of the main characters and many of the settings and contexts of the book, Isaac's script used specific and striking incidents from the book and employed the same interpretation of those incidents as Hodgson and Jarvie had given. These details and incidents were a key element in the book and the fact that they were presented as being factual rather than fictional did not make the writing of an autobiography any less the result of an intellectual effort. A substantial part of the book had been copied and that was that.

As a Chelsea supporter, this blogger well remembers, back in the 1960s and again in the 1907s, singing "Que Sera Sera/We're going to Wem-ber-lee".  This use is noted by Wikipedia in its entry under Que Sera Sera. In the 1990s and again in the early 2000s, taking his sons to watch Barnet, he was saddened to hear the same tune put to use in "Shoot the Enfield scum".  Other football rivalries have been commemorated in similar fashion (e.g. Brighton & Hove Albion and Crystal Palace). I have not found any evidence that the composers have sought to prevent this use.
Posted by Jeremy at 3:07 pm