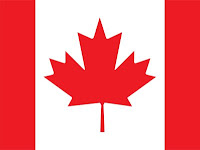 Yesterday (April 30th) the US Trade Representative (USTR) released its 2009 Special 301 Report, the annual survey of the “adequacy and effectiveness" of IP protection for the US’s trading partners. Ambassador Ron Kirk launched this year’s Report identifying it as the critical US Government tool that identifies “urgent problems that undermine one of America’s great strengths in the global economy – our innovation and creativity”.
Right: Canada -- a country to list, and to watch ...

Twelve countries feature on this year’s Priority Watch List: China, Russia, Algeria, Argentina, Canada, Chile, India, Indonesia, Israel, Pakistan, Thailand and Venezuela. No surprises for the continued featuring of China and Russia, despite some improvements over the past year in the enforcement and protection. Algeria and Indonesia have been added this year along with ... Canada, the nation’s first appearance.

Canada’s failings in its IP protection regime similarly featured in an earlier industry report from IIPA, The IIPA Special 301 Recommendations filed with the USTR in February. The International Intellectual Property Alliance, a grouping of seven trade associations from the US copyright industries, had made recommendations to USTR based on their own statistical survey into trade losses due to piracy on 17th February 2009. The grouping, made up of the Association of American Publishers, the Business Software Alliance, the Entertainment Software Association, the Independent Film and Television Alliance, the Motion Picture Association of America, the National Music Publishers Association and the Record Industry Association of America, said of their Canadian cousins “Canada remains almost entirely out of compliance with the global minimum world standards embodied in the Treaties”.

Those readers anxious to review the ground on both sides of the fence, and working on the basis that, for the creative industries, the audience is a key factor in the creative process, may wish to cast their eyes over the IP Watch List report 2009 from Consumers International’s Access to Knowledge Network project.

Sixteen countries are ranked from “best” ie most consumer-friendly to “worst” ie most hostile to consumer interests. Canada was not surveyed, so a lost opportunity there for the nation to feature near the top of an international list but in a “good” way. The outright “winner” was India with the somewhat disingenuous comment:

“India's Copyright Act is a relatively balanced instrument that recognises the interests of consumers through its broad private use exception, and by facilitating the compulsory licensing of works that would otherwise be unavailable. Neither has India rushed to accede to WIPO Copyright Treaty, which would expose India's consumers to the same problems experienced in other jurisdictions which have prohibited the use of circumvention devices to gain access to legally-acquired copyright material. It is true that copyright infringement, particularly in the form of physical media, is widespread in India. However this must be taken in the context that India, although fast-growing, remains one of the poorest countries in the world. Although India's cultural productivity over the centuries and to the present day has been rich and prodigious, its citizens are economically disadvantaged as consumers of the culture to which they have contributed.”

UK is bottom of the list (“[I]t is generally very restrictive”), Australia 9th (“strongly favour[s] copyright owners over consumers”) and the USA 4th:

“Amongst all the countries surveyed in this Watch List, the United States is the most obvious anomaly, in that whilst its own copyright regime remains amongst the most liberal in the world - almost entirely due to its broad "fair use" exception - it is the most unremitting in its demands for higher levels of copyright protection from other countries, all of which are net importers of copyright content from the USA. Having said that, the United States copyright regime is far from a paragon. For one matter, its heavy reliance on the discretionary doctrine of fair use to provide flexibilities to content users may cause confusion and uncertainty as to exactly what is permitted and what is not; a state of affairs of which some content owners have taken full and unfair advantage.

For another matter, its terms of copyright protection have been ratcheted up time and again, now peaking at 120 years from the date of creation for works of corporate authorship. Also, the US copyright regime betrays much partiality to copyright owners in matters of enforcement, particularly in the DMCA amendments which prohibited the circumvention of Technological Protection Measures (TPMs) even for fair-use purposes, and streamlined the removal of content from the Internet by IP owners without court order. For better or worse, the United States effectively sets the global benchmark for intellectual property protection worldwide, through the norm-setting activities of its trade representatives and private sector lobbyists. Thus other countries can at least be thankful that the relatively balanced and equitable treatment shown to consumers in US law throws its one-sided foreign policy on IP into stark relief.”

Handy little country-by-country summaries of the regimes surveyed will benefit law students, cunningly demonstrate consumers’ concerns through the nature of the questions posed and, perhaps, may suggest to pro-IP lobbyists areas in their arguments that may need attention if
they want to demonstrate real concerns for the rights of the audience or consumer.