Too big to infringe? 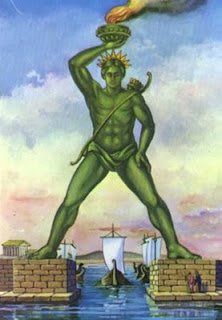 My old friend Rob Kunstadt (R. Kunstadt PC) has just sent me this free link to his highly topical article on the proposed Google book settlement, published in this week's National Law Journal. Google is a veritable Colossus these days and it looks set to guard the gates to global literature. In his distinctively punchy prose, Rob's conclusion pulls no punches:

"The settlement would reward Google's massive unauthorized online reproduction of copyrighted works, by making Google a "shadow copyright office" with a revenue percentage—unlike the real Copyright Office, which collects a flat fee.

Google took from the authors first—and belatedly now seeks to legitimize its misconduct by this settlement. Instead, Google should be punished hard, to deter such schemes. Otherwise, Google will succeed where Napster failed. Respect for IP law—as well as the rule of law in general—will decline. ...

Google's conduct fits the definition of a public nuisance, and may be enjoined as such. It imposes a small harm on a large number of authors. The harm, copying only a portion of each work, is calculated so as not to make it worthwhile for an author to incur the expense of suing for injunctive relief. Google, despite its cute slogan "Don't be evil," is like a large paper mill releasing noxious gas over a wide area, sufficiently diluted that you smell it but faintly. Like those banks that are now "too big to fail," is Google really "too big to infringe"?"

However good or bad Google's conduct may seem, and however one views the legal and moral issues, the fact remains that once Google's ambitious project succeeds -- as surely it will -- there is no room for a competitor and is unlikely to be one. This raises fascinating policy issues for competition regulators as well as for the copyright-driven commercial and educational sectors. Should Google be (i) scrupulously regulated by one or more public bodies, (ii) nationalised (a popular Socialist option in Europe in the past and a current option for all shades of political philosophy regarding banks), (iii) broken up into a bunch of Baby Googles or (iv) left to its own devices? We shall soon find out.
Posted by Jeremy at 5:49 am

Spot the deliberate error in the above picture...

Here is a link to an objection (docket no. 91) filed on behalf of authors from Australia, which may be of particular interest to you in europe.