Roundtable edges towards a new order for copyright licensing in Europe? 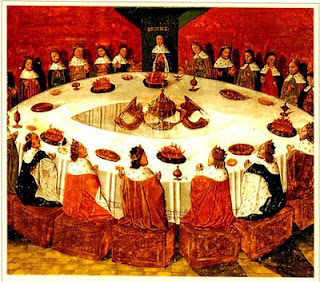 "European Commissioner for Competition Neelie Kroes has welcomed progress made towards pan-European music licensing following discussions in the Online Commerce Roundtable. In particular, she welcomes confirmation by French collecting society SACEM that it is willing, in principle, to entrust other collecting societies with pan-European licensing of its repertoire and to act as non-exclusive rights manager for publishers and other collecting societies [This may not be as big a concession as it seems. The words "in principle" immediately recall the gap between principle and practice]. She also welcomes confirmation by multinational record company EMI that it is ready to entrust rights managers to offer its repertoire for the whole European Economic Area (EEA) [Why shouldn't it be willing? With revenue from repertoire heading for free-fall, anything a rights owner can get is probably welcome] and notes Apple's statements that if iTunes was readily able to license rights on a multi-territorial basis from publishers and collecting societies, it would consider making its content available to all European consumers, including those in EU countries where iTunes is currently not available [But iTunes is just one string to Apple's bow, cf. Apple's premium range of iPod and iPhone hardware. The more iTunes is available, the easier it is to market its goods].

Commissioner Neelie Kroes set up the Roundtable in September 2008 in order to examine ways to reduce barriers to online commerce so that consumers can take better advantage of the opportunities offered by the Internet [other than by helping themselves to repertoire for nothing, which seems to be the favoured option of most consumers these days] ... The report on the Roundtable, just published on the Europa website, outlines the conclusions of the meeting that Commissioner Kroes hosted on 17 September 2008, as well as of a 16 December 2008 follow-up meeting which focused on the distribution of online music.

Commissioner Neelie Kroes welcomed the conclusions of the Report, stating that: "There is a clear willingness expressed by major players in the online distribution of music in Europe to tackle the many barriers which prevent consumers from fully benefiting from the opportunities that the Internet provides. I therefore encourage the major players, in particular publishers and collecting societies, to move quickly to adapt their licensing solutions to the online environment [i.e. it's best for them to jump before they're pushed]. I will review progress at the next meeting of the Roundtable that I will organise shortly with other major players in the online music market".

At the September Roundtable, all participants recognised the potential for EEA-wide music licensing in the online environment, and that this was hindered by rights generally being territorial and usually licensed for certain territories only [i.e. it's the fault of copyright]. Commissioner Kroes welcomes the readiness expressed by the participants to adopt licensing solutions which are fit for the online environment. ...

As regards the online distribution of goods, a variety of views were outlined in the Roundtable. The Commission will use the inputs of parties which participated in the public consultation as an input for its ongoing review of the legal regime of vertical restraints (Block Exemption Regulation 2790/1999 and Guidelines on Vertical Restraints). Draft legislation on vertical restraints will be published during summer 2009 and subject to a public consultation for stakeholders to submit their views.

Commissioner Kroes will continue working with her colleagues in the Commission on the issues of online piracy and counterfeiting and will, where appropriate, support action on the regulatory side to tackle these damaging phenomena [Where would it be appropriate not to support action to tackle P&C?]. In parallel, she will continue to examine ways to eliminate unjustified barriers to online commerce.
...

The Commission invites all interested parties to submit their comments by 30 June 2009 on the issues raised in Sections III.1 and IV.A) of the Report concerning the online distribution of music to Comp-Greffe-Antitrust@ec.europa.eu

The comments should, in particular, focus on licensing solutions which would foster legal offerings of online music in Europe...".

Readers have little over a month in which to comment.
Posted by Jeremy at 12:26 pm