Thanks to a tip-off from Hugo Cox - who clearly spent the holiday weekend in the UK browsing the International Herald Tribune and the New York Times - readers might like to keep an eye on progress of a plan being proposed today in Strasbourg by European Telecommunications Commissioner Viviane Reding and Meglena Kuneva the Consumer Affairs Commissioner. The proposal is that consumers be enabled to shop online throughout the EU on the payment of a single licence fee for media products. In justification the proposal says:

"The offer of content online is growing more and more but the current regime is still locked into national territorial licensing, with the result that EU consumers are often prevented from legally watching content anytime, anywhere on any platform."

The New York Times observed that resistance would be expected from the EU collecting society network which administers rights territorially across the 27 states and (ergo) different copyright regimes. You don't say! Like democracy, collective administration might be the worst form of [administration] (pax Winston Churchill] "except all those other forms that have been tried from time to time" - like endless individual owners being sought out by consumers seeking licences, or piracy or file-sharing perhaps? 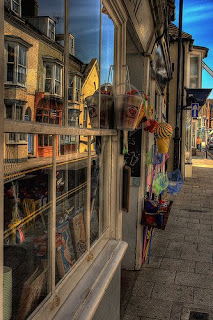 There is the problem of pricing. If there is a European-wide licensing price, how is such a price point to be determined (or indeed regulated) and accommodate competition concerns? There is the risk of penalising consumers in economies that are less developed by charging high prices that are out of step with their local economic conditions. Alternatively a lower, single EU-wide price penalises creators and owners in countries with a tradition of higher value licence fees who suddenly are faced with such a drop in the value of their copyright revenues that it damages future investment in their local creative and cultural economies. It is not in the interests of creators and owners if consumers can simply acquire media at rock bottom prices in less developed Member States - the bucket-shop effect (left). Nor is it, in the long term, in the interests of consumers, consumer choice or the long term future of creative investment right across the EU (and its international economic muscle) if values of content are driven down right across the board.

One hopes the Commission may look for guidance to Article 5 (2) Berne, namely that "the extent of protection, as well as the means of redress afforded to the author to protect his rights, shall be governed exclusively by the laws of the country where protection is claimed", as a guide to the territory in which the consumer is liable to payment for the licence to download and thus the price would reflect local differences in tariffs or value.
Posted by Harcourt at 1:48 pm