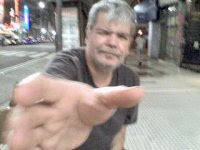 From Catherine Saez of Intellectual Property Watch comes this piece about an Argentinean philosophy professor, Horacio Potel (right), who faces an action for copyright infringement after posting translated versions of French philosopher Jacques Derrida’s works on a website in an attempt to make foreign philosophers' works accessible to Spanish-language readers. Professor Potel says he first created an open source website, “Nietzsche in Spanish”, in December 1999, adding “Heidegger in Spanish” in June 2000 and “Derrida in Spanish” in June 2001.

Apparently in December 2008 French publishing company “les Editions de Minuit” lodged a complaint which was passed on to the French Embassy in Argentina and it became the basis of the Argentina Book Chamber’s legal action -- a criminal prosecution -- against Potel.

Apart from the obvious question -- why should anyone want to read Derrida in any language, never mind Spanish? -- there are some serious issues here. Works of this nature, if available at all in Spanish, are published in Europe, produced and sold in euros and imported at great expense to the local market. Countries such as Argentina are too rich to plead Third World status but insufficiently affluent to create a large enough local market for products of this nature that can be satisfied in the normal commercial way. Both the Berne Convention and the Universal Copyright Convention made failed attempts in the previous century to address the needs of developing countries, but that was in the days when web publication was not an option.

The unauthorised copying and uploading of a translation of another's work in this manner does not appear to be the sort of act comfortably contemplated by defences based on fair use for educational purposes, there are some infringements that are better tackled as commercial propositions than as legal issues. If the infringing acts are unlikely to result in lost sales, could they not be better treated as an opportunity to secure some income through a negotiated royalty, rather than as a chance to create ill-will and give the academic community yet another reason for assuming that Google Book will somehow provide a panacea for ills such as these?
Posted by Jeremy at 4:17 pm